skip to main | skip to sidebar

Little Mick in the making 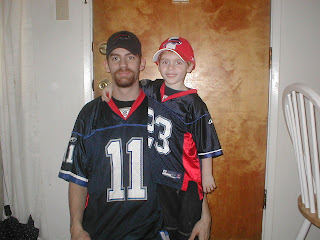 I love it when Mick and Justin dress alike, it just so cute!

The Dangers of a Wii

Mick and I decided to spend some of our tax money on a Wii. We like to play games together and a Wii is just so much fun you cant go wrong. The kids can even play witch is nice too. Its easy enough for Sky and Justin just rocks at Bowling (his first game he bowled a 182).

Well last night my sister was over, Mick was playing Wii bowling with Justin, Skyla and my Nephew Jessie were running around playing and My sister was helping me put together a DVD bookshelf we just bought. SO the house was just crazy. All of a sudden out of the corner of my eye I see Skyla run out of the room and before I could look up she ran behind Mick right as he was swinging his arm back to bowl. I looked up all the way just in time to see Sky get whacked right in the eye with Micks hand and the Wii controller. 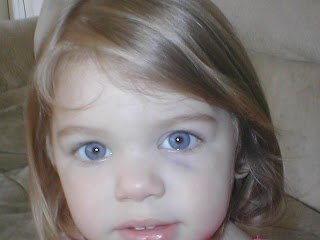 So here are some Pics of her pretty black eye. She didnt cry to much and after about 30min of Mick totally babying her she was fine and wanted to play Wii too LOL. Needless to say when we play now we make sure there isnt anything else going on in the house. 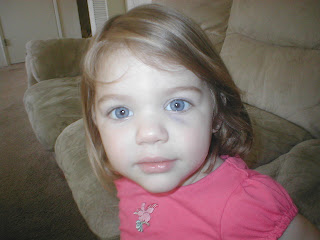 Even with a black eye she still has some stand out gorges Blue eyes.

Last night I was at my book club from about 7-9pm. Boy did I have some busy bee's at home wile I was gone. Mick did some art with the kids and they all YES even Mick made me Valentine's cards. Justin did his all by himself it has lots of cut out heart's and he even took scrap paper and glued them together to make a rose. He did such a good job it was really impressive to see how creative he is becoming. Skyla gave me a cute paper that she drew a pic on and colored, cant tell what it is but hay she is 2 it was still really sweet.Mick made me a WONDERFUL card it made me cry. He wrote such a sweet little paragraph to me and even found a old pic of me and him from about 7 years ago and glued it to the inside. It was so sweet, but he made me promise I wouldn't show it to anyone but he didn't say I couldn't tell you all about it :).I love my family. XOXOXOXOX 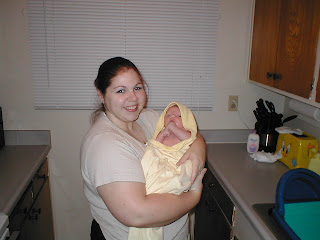 Justin has had a hamster for about 3 1/2 years (his name was Hamsterveal from Lilo and stitch). He finally died yesterday 2/13, when we woke up we found him. When Justin got up I had to break the news to him. He took it really well and was ok with the fact he was now in heaven. After school we took him to the open lot next door and buried him, right in the view of Justin's bedroom window (so when he looks out he can see him and remember all the fun he had with him, Justin's Idea). Once we got back the kids got to play outside with their friends Jack and Nate. Justin seemed to be fine and getting over his loss so I thought.

When it was time to go home we got up stairs and he broke down BIG TIME! This was the first time Justin has ever lost something (besides fish witch he thinks are fun to flush). It was so hard to see him cry and feel the pain of losing something he loved. The worst part was I knew I couldn't do this for him and he just had to go through this. This hit me pretty hard as I realized he is growing up and I cant make everything go away for him. He has to feel and go through these things by himself. The only thing I can do is be there for him when he needs a hug or kind word.

Last night at bookclub we got on the subject of helping your kids be independent. I really though about how I can start stepping back a little and let Justin do more on his own. He is going to be 6 years old in March he isn't a baby anymore. As hard as it is for me to let loses my grip even more then I all ready do, I know I have too. Man I hate my kids growing up, know matter how old they get I don't think I will ever be ready for it.

3 house's getting leveled to the ground right by me :) 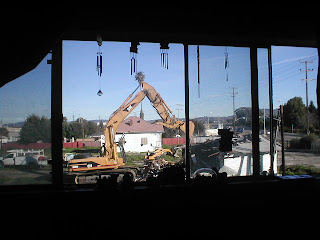 These pics were taken right outside the kids bedroom window. We had a great view and the kids just thought this was the coolest thing ever. 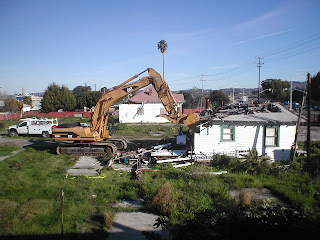 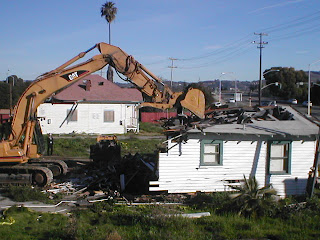 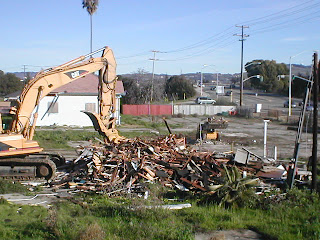 It only took about 5min for them to get the house completely torn down. Pretty cool thing to watch.
For those of you who dont know this used to be a really trashy trailer park. There is also a Brick building about 100 feet away the used to be a bar so as you can imagine it used to be really bad. About 2 years ago someone bought the land and cleaned it all out except for the 3 house and Bar (witch is about 30 feet from the Becks living room window). It has just sat like this for the passed 2 years. Its nice to see them finally doing something with it, but Im not looking forward to all the construction noise. I'll just be glad once there all done with it.

The Rogers
Mick and I live in California with our 2 wonderful kids. Im blessed to be a stay at home mom and just love it.